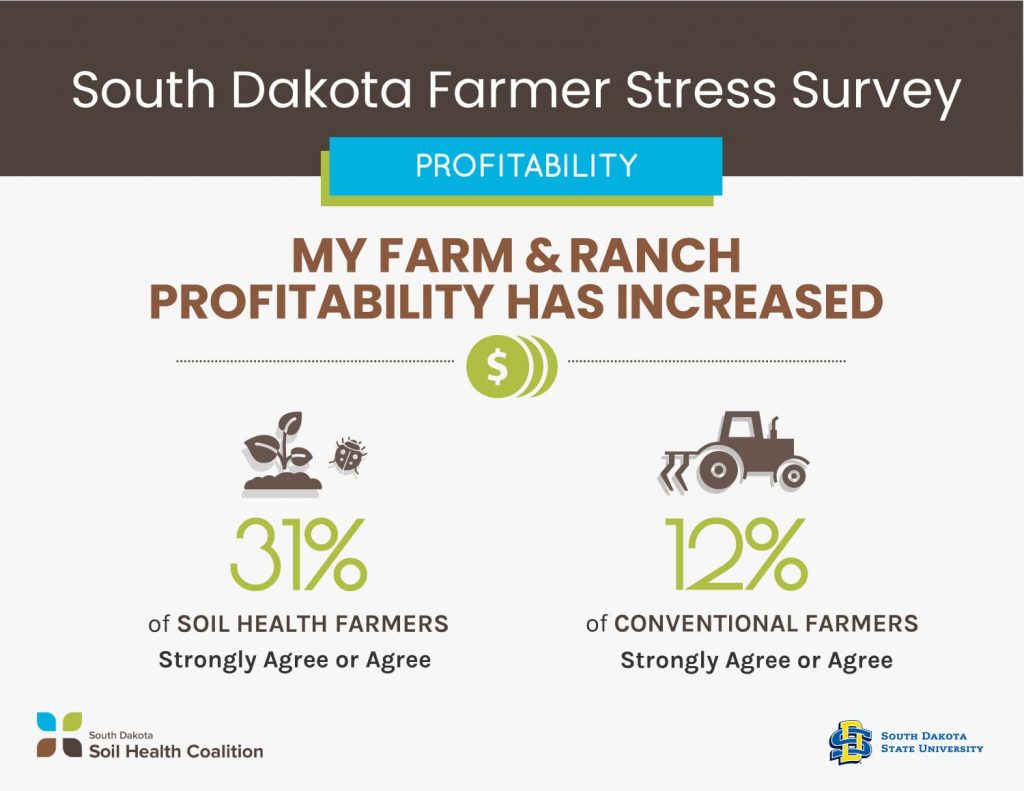 PIERRE, SD- By any measure, 2019 was a stressful year for South Dakota farmers and ranchers. But a new poll suggests that a significantly higher percentage of producers who are using soil healthimproving practices on their operations experienced less stress, are more satisfied with farming and/or ranching and are more optimistic about their futures than their conventional peers.

The poll suggests soil health farmers and ranchers are having more fun, too.

Conducted by South Dakota State University, in partnership with the South Dakota Soil Health Coalition, and supported by the USDA Natural Resources Conservation Service, the survey queried both conventional-practice producers and soil health-practice producers to assess their stress levels on a range of issues from market price volatility to extreme weather events. They were also asked to assess current and future operation profitability, input cost pressure and natural resource conditions for generational succession.

Soil health producers reported having lower input costs and a higher degree of confidence that their operations would be better positioned, both in terms of natural resources and economics, for generational succession. Specifically, 31 percent of soil health farmers and ranchers reported increased profitability during the past year, while only 12 percent of conventional producers did so.

Additionally, when asked to look ahead to the next 3-5 years, a significantly higher percentage of soil health producers (69 percent vs. 36 percent) predicted that their farm profitability would increase.

The survey also asked farmers and ranchers to predict the future resiliency of their farming and ranching operations. Soil health producers were significantly more optimistic than their conventional counterparts (83 percent vs. 60 percent) that their operations would be more resilient to weather extremes.

Flooding and trade market challenges notwithstanding, more than 30 percent of soil health producers described their farming or ranching experience in 2019 year as “challenging but fun” compared to only 12 percent of conventional producers.

SDSU’s Larry Gigliotti, Ph.D. who conducted the polling, said that while farmer and rancher respondents for the survey totaled only 107, the results are statistically valid and “point to an interesting correlation between those using soil health practices and resulting peace-of-mind benefits.” Further, Gigliotti said that there was a direct correlation between the number of soil health practices the farmers and ranchers used (i.e. no-till, cover crops, diverse cropping rotations, etc.) and the level of stress and happiness they reported experiencing—as well as anticipated in the future.

“Even among producers who reported using some soil health practices on their operations, the ones using more of those practices reported less stress, greater farming satisfaction and greater optimism,” he said.

“The weather from the last two years, and especially last year, has put farmers and ranchers under some tremendous stress,” said Jeff Zimprich, State Conservationist for the USDA Natural Resources Conservation Service in South Dakota. “Results from this survey are one confirmation of what we’ve been hearing for some time—that all farmers are stressed in extreme weather, but the farmers and ranchers who are using soil health practices are less stressed because their soils are more resilient. There are a number of organizations and agencies partnering together now to help farmers and ranchers learn more about and use soil health improvement practices, and that’s more important than ever as we could have another spring with too much moisture or a year that is too dry.”

Cindy Zenk, South Dakota Soil Health Coalition coordinator, said the results of the survey are another indication of the many benefits of soil health practices

“The economic, agronomic and environmental benefits of regenerative agriculture are becoming increasingly accepted and documented,” she said. “The stress reduction, optimism and peace-of-mind that soil health producers have reported in this survey provide further evidence that if you take care of the land, the land will take care of you,”.